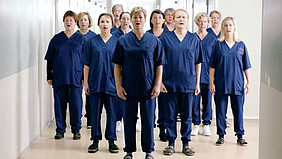 Putting Aging and Care on Screen

Join us for the 3rd movie in our movie series - Songs of Care: Ruthless Times (2022). The movie will be shown in Finnish with English subtitles. The discussion will be in German and English.

"Ruthless Times - Songs of Care is a documentary film with choral tableau vivant scenes juxtaposed with documentary episodes, capturing the current crisis in the Finnish elderly care sector. The care-workers’ anonymous testimonies have been composed into choral songs. Retirees and older citizens sing impudent songs playing with the economic jargon of our time, making visible the absurdity of the bureaucratic language that has penetrated every aspect of human life.

The film follows, for example, retirees of a small municipality in Eastern Finland as they witness the privatization of their local care services and care workers as they cope in the midst of the digitalization of care, with robots roaming the halls of care homes and nurses being relegated to remote-care call centers. The main protagonist is Tiina, a care worker who was one of first to bring up the malpractices occurring in the care sector for older adults in Finland, and who was subsequently black listed and received personal threats. With its dark humor, and at times grim but poignant moments, the film portrays the mismatch between the ethical and economical foundations of care work" (DocPoint FINEST Market 2022).

The screenings are free of charge and open to the public. Please get your tickets directly at Rechbauerkino (Rechbauerstraße 6, 8010 Graz) – first come, first serve!

We are looking to seeing you at the cinema,
Ulla Kriebernegg, Anna-Christina Kainradl, Eva-Maria Trinkaus (Center for Interdisciplinary Research on Aging and Care (CIRAC)), Derya Özkaya Öztürk, and Nejra-Nuna Cengic (Centre for Southeast European Studies (CSEES))

The movie series CareAgeCinema is organized by the Center for Interdisciplinary Research on Aging and Care (CIRAC) and the Centre for Southeast European Studies (CSEES), collaboration with the Age and Care Research Group Graz, the Elisabeth-List-Fellowship-Project “Gender Matters: Aging, Care, and Migration,” and Radio Helsinki 92.6 - Freies Radio Graz at the Filmzentrum im Rechbauerkino.

The event is co-funded by the European Union’s Horizon 2020 research and innovation program under the Marie Sklodowska-Curie grant agreement No 101029279-CareWork.